Canoe was never on my must go list of restaurants partly because I'm not a fan of the O&B restaurants and people have said it's as good as people say. In addition, their menu just did not attract me. Canoe offers Canadian and European cuisine. We were seated right next to the window with an awesome night view of Toronto and the CN Tower in Xmas colors. The lighting in the dining room was dim, thus it was hard to take nice photos and I didn't want to turn on my flash causing a big commotion around me. I do apologize of poor photos. 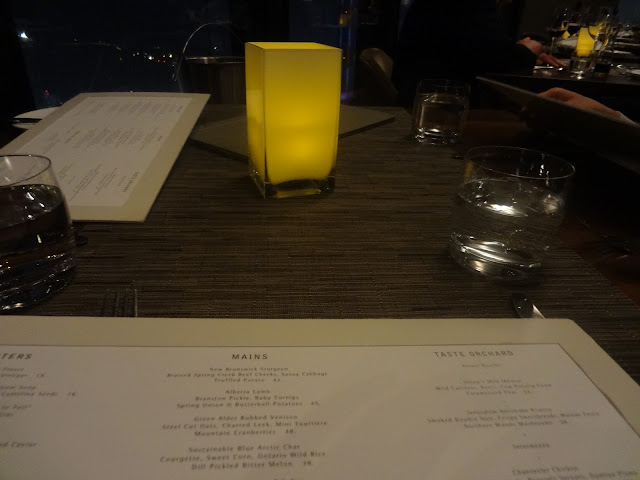 The cocktail I got was the cocktail of the season? It was called christmopolitan" which is a play on Christmas and cosmopolitan. It was mainly cranberry juice and vodka. At first sip, it tasted more like juice than alcohol. As you got to the bottom, the vodka taste became more prominent.
To start off, complimentary bread with chickpea spread. 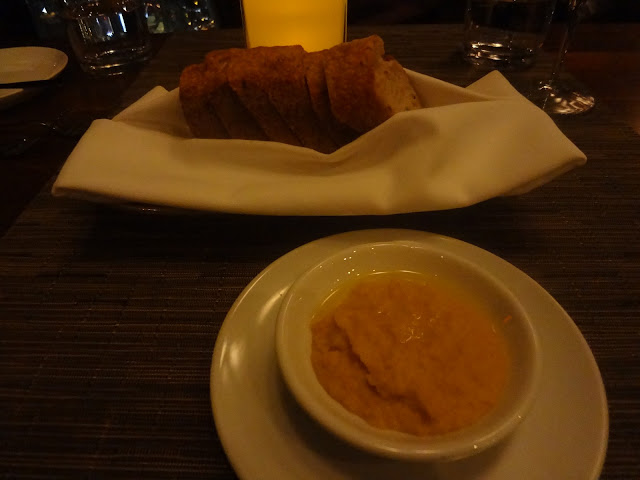 The B.C. Salmon was ordered by my friend and I did have a small portion to taste. The salmon was nicely seared or torched. The inside was not the pinkish color you would expect from a salmon. The color of the fish was still translucent but cooked. The taste of the salmon was light and did not overpower the natural salmon taste at all. I really enjoyed this dish.
Nothing on the appetizers menu really caught my eye so I decided to try their take on the classic caesar salad.  Overall, the salad was okay. I found the dressing to be too citrus-y and too sour to the pallet. Did not understand the purpose of eel and lentils in this dish. I did like the soft boiled quail egg as it was perfectly cooked like soft boiled eggs in ramen, which I love. I do have to say, my favorite caesar salad is from Jacob and Co. Steakhouse. You have to try someday.
My other dear friend order the oysters to start. I had one and I have to say as a non oyster fanatic, it was very fresh and sweet. I did enjoy it more than I expected.
For entree, I ordered a fish dish. I`m not a fan of meat and large pieces of meat (mostly steak), it just grosses me out. Thus, I usually order seafood, chicken or fish. This was an interesting dish because it included touches of molecular cuisine. The white foam you see in the picture is not nothing. It is actually cauliflower foam. At first, I was not able to identify the ingredient and had to ask our waiter afterwards. It was really interesting eating a solid food in another state. Call me dumb but is arctic char is same as salmon? The reason I'm asking is the fish in the below tasted just like salmon... The fish was cooked perfectly and it was served on top a bed of Ontario white rice and sweet corn. The plate was also assembled with sweet corn puree. Overall, the dish was good but not memorable aside from the cauliflower foam.
Up next, my friend ordered the rib eye cooked to medium. I thought the meat was okay, not for my taste. The little potato triangles were a little too hard and dry.
I think this was the first time I had venison  The texture and taste of venison is very much like pork liver if you ever had that. The round dome that looks like a bun but it's actually a tourtiere. It's very much like a beef puff pastry in a ball shape.
Nothing really special about the butter tart.
This didn't taste good either.
I decided to order the sticky toffee pudding since I wanted to compare this with the one I had at Starfish. I would have to say Starfish's sticky toffee pudding was much better. The sticky toffee date pudding was not chewy enough for my taste, it lacked texture. The white blob was almond foam and the orange ball is passion fruit sorbet with a wafer cracker on top. The whole dessert was immerse in a caramel sauce which made everything too sweet. The sourness from the passion fruit sorbet did not balance anything. Overall, this dessert was alright.


The service was excellent. All dishes were explained by the server upon presentation and they were very knowledgeable about their menu. We had personal space with attentive service without being too intrusive and annoying. Food wise, I didn't find anything that was over and beyond. It was good. I would not go back again because I found the menu items to be limited and didn't offer enough variety. I believe a meat eater would enjoy Canoe more than I did.

I'm not a huge fan of izakaya but I always like a good place to chill with friends. I read a couple of reviews on Chou Izakaya  and it seemed pretty decent. I'm not a fan of Guu due to the crowdedness and the wait issue. There was a Groupon for Chou Izakaya for 50% off, so of course I had to snatch that and try this place. Finally. 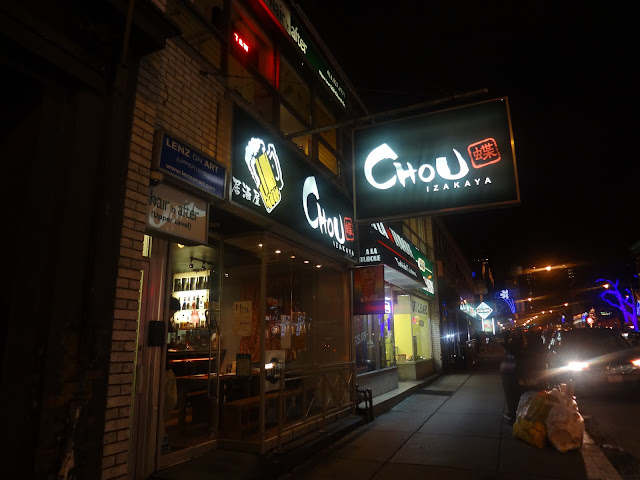 We made reservations for 5:30pm, thus the quietness in the restaurant. The crowd starting coming around 6pm. The environment was nice and spacious, unlike Guu. We are all greeted upon entering the restaurant in the usual Japanese manner. 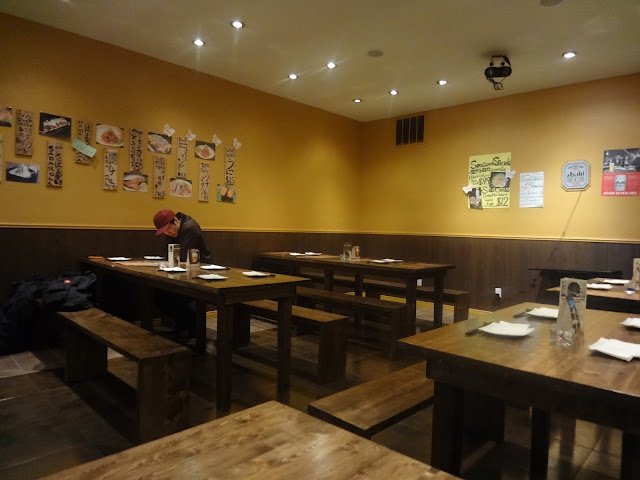 The takoyaki were okay. The octopus meat was small and close to none existence. I think the best place in Toronto for takoyaki is at Manpuku.
These cute little round deep fried balls are deep fried curry mashed potatoes. Not sure what the sauce was but it didn't add anything to the flavour. Wasn't too crazy about these either.
The deep fried sweet shrimps were big, a very good deal for $7. No need to peel the shell, you can just eat everything together. They were perfectly fried. However, I wasn't too fond of the greasy oily taste upon first bite but my friend loved them.
The sweet shrimp sashimis were my favorite! They were fresh and sweet and the house-made soy sauce was just so good. The soy sauce was not overly salty and tasted just right with the sweet shrimp. I'm in awe just reminiscing about it...
I sucked the brain out of this poor little guy. So cruel yet so good. 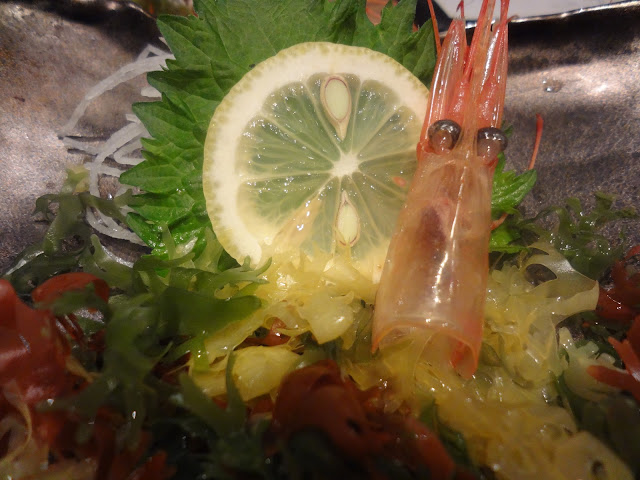 All the blogs I read said the pork belly skewers were really good so I had really high expectations of them. They turned out to be alright for me. I like the teriyaki flavour better than sea salt. They were tender and had the right balance of fat and lean meat.
The grilled squid was a little overcooked with a chewy and rubbery texture. I didn't like them.
Tofu steak may sound bad but they actually turned out to be pretty good. The sauce and the soft tofu tasted really nice together along with the bonito flakes.
The scallops were the most expensive item we ordered and it didn't tasted good. Scallops were overcooked. The combination of wasabi and soy sauce was not complimentary 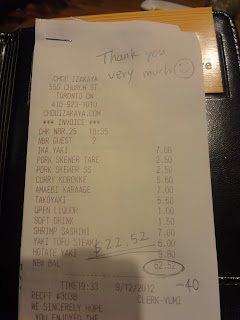 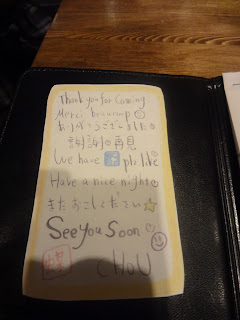 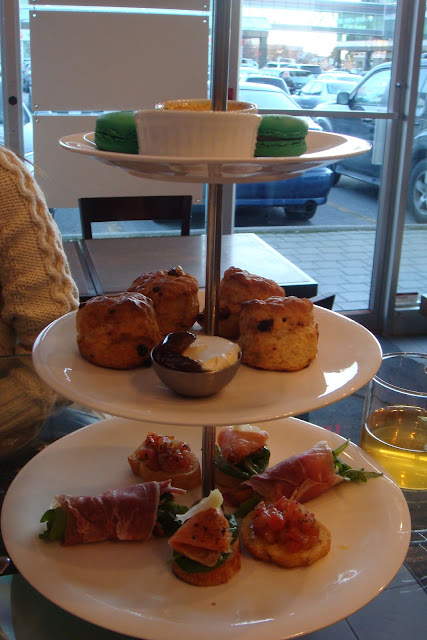 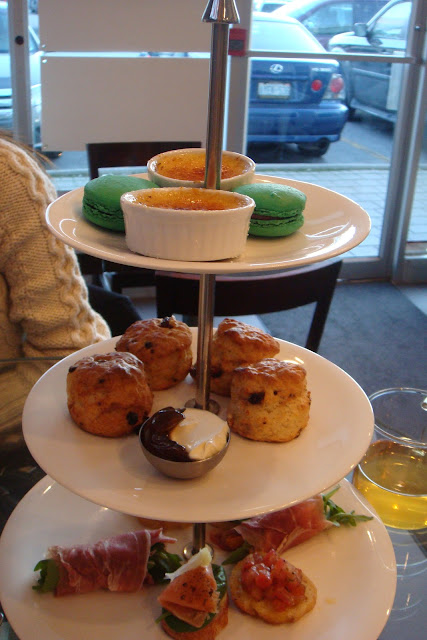 The One That Got Away

Ever since I had terrible fish and chips from the Pickle Barrel (I know... what was I thinking?!?!) I was on a hunt for good ones. 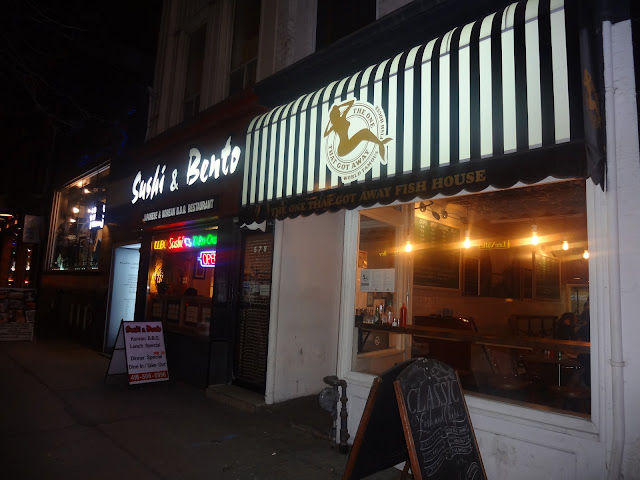 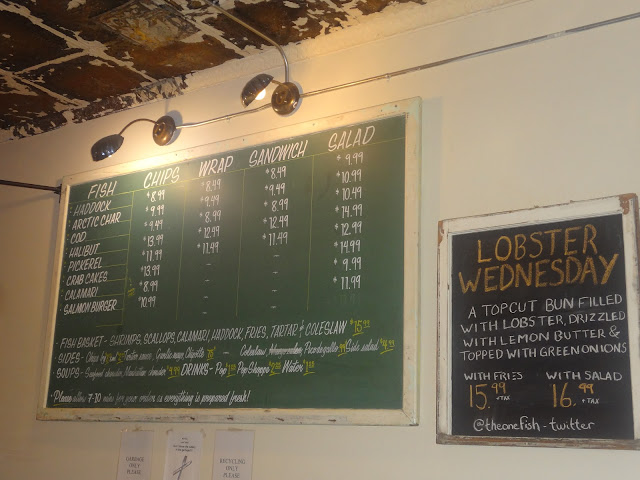 Perfectly fried piece of fish, very fresh and the tartar sauce gave it the extra kick. As for the fries... they were not good. Having just ate the duck fat fries, these fries were no match. They were bland and hard. I guess it would be unfair to compare the two since they are on two different playing fields.
I was very excited for these fish tacos as I heard many many great things about them. However, I was disappointed.  The tortilla wrap was too thick and hard. The whole taco together had no taste. The fish was nicely fried, but aside from that, the tacos were just bland. They looked appealing but tasted the opposite. In the end, we just ate the fish and left everything else as it is. My friend had try the fish tacos from Grand Electric and at that time she thought they were over-hyped. After trying these guys, she thought Grand Electric was a lot better.
"You only learn to appreciate the good when you had worse" - JL

Email ThisBlogThis!Share to TwitterShare to FacebookShare to Pinterest
Labels: Downtown, Fish and Chips

Afternoon Tea @ Windsor Arms in Photos ONLY from 2011 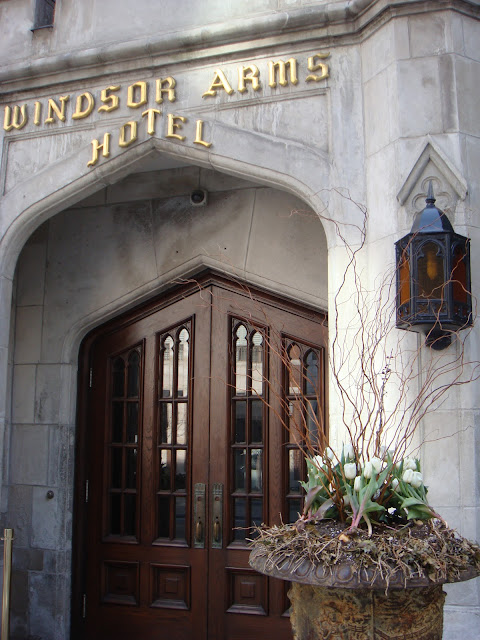 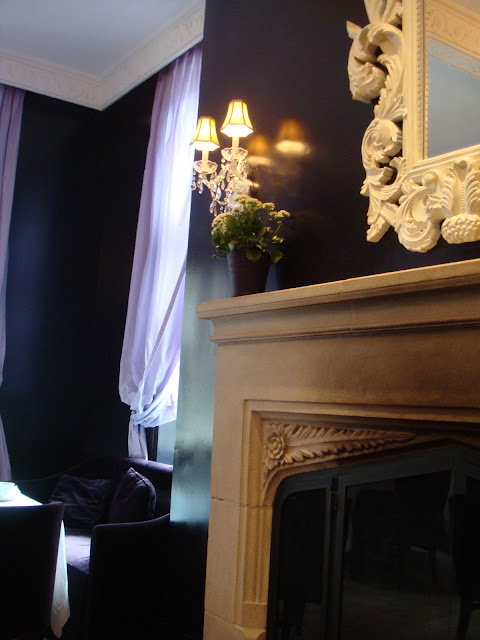 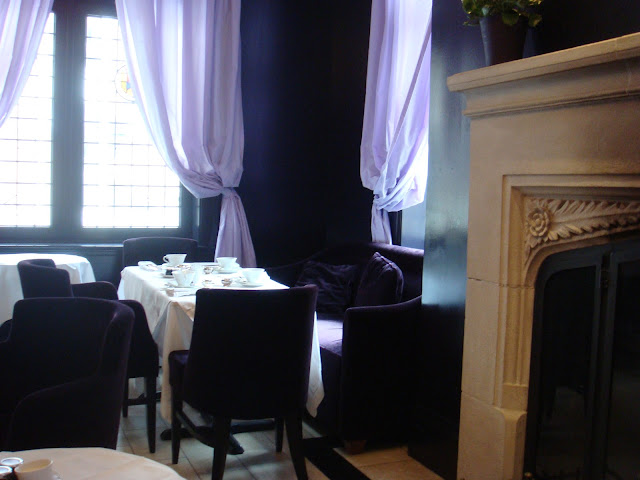 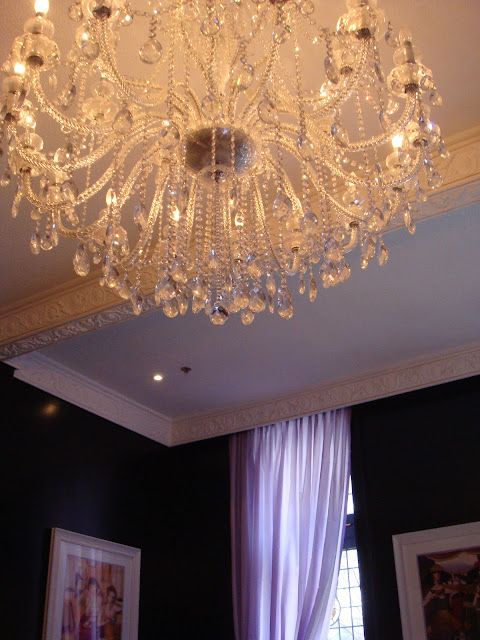 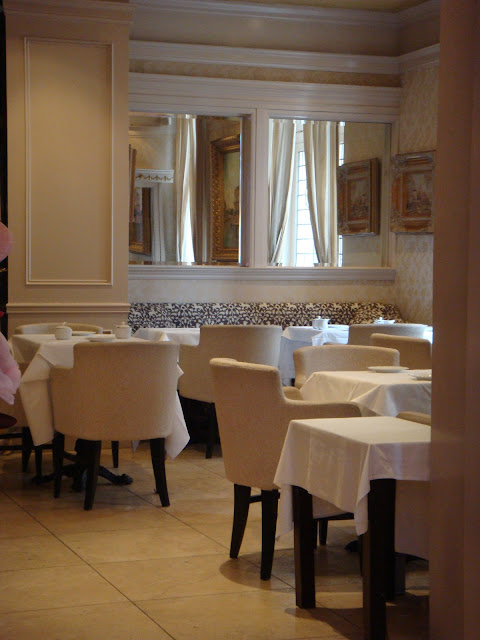 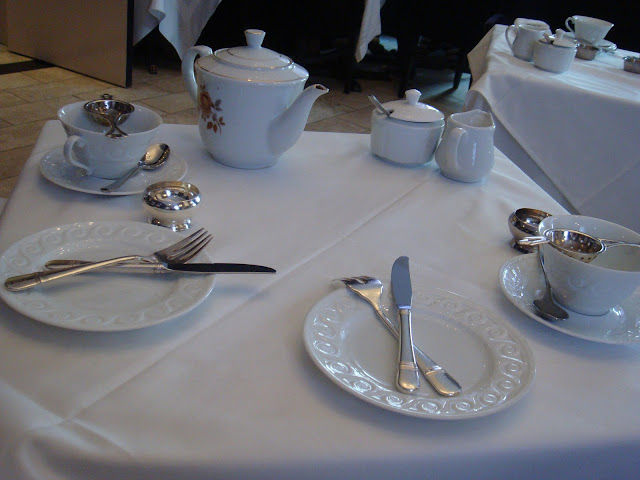 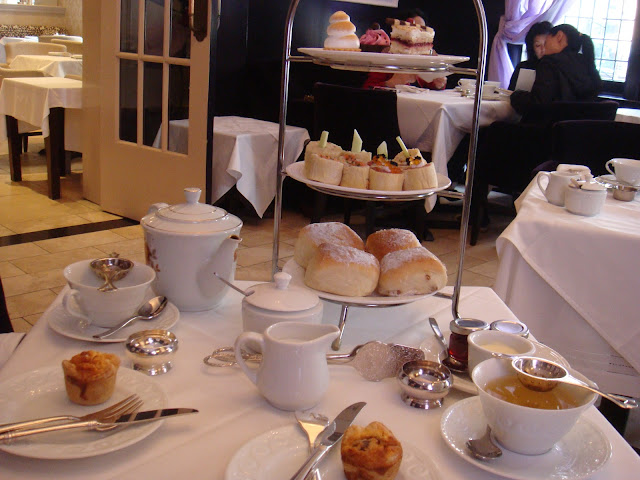 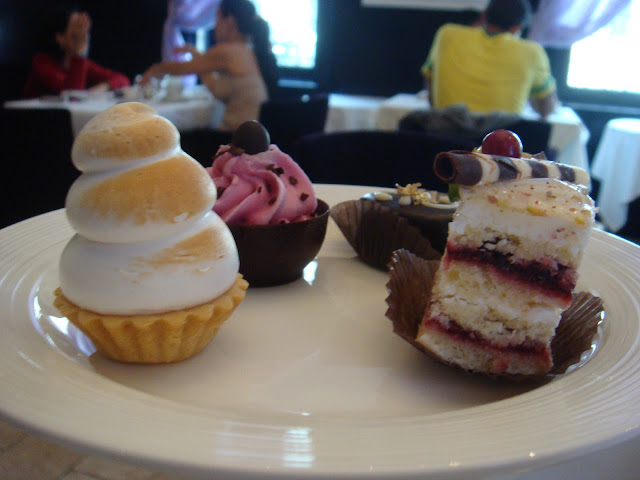 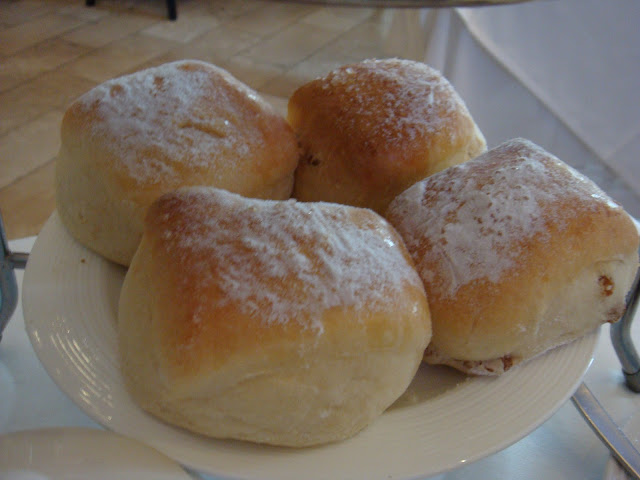 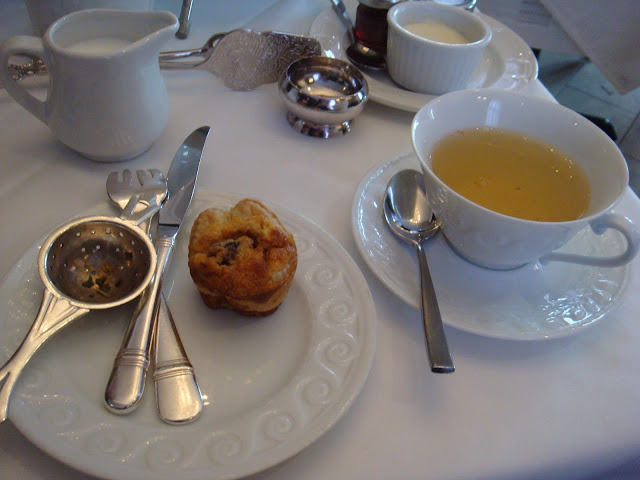 "Less is More" and I originally made plans to go to Westlodge. However, when we got there around 5:45pm, the waiter told us they were fully booked and we had to be turned away.  Hungry and cold, I put on my thinking hat and quickly thought of WVRST. It was always on my list but never tried it due to its inconvenient location from work. I was EXCITED! Walking down King West, I saw "The One That Got Away", always wanted to try that place. So my friend and I decided to do a little food adventure and hit up 2 places that night. Please expect review on The One That Got Away shortly after this one. 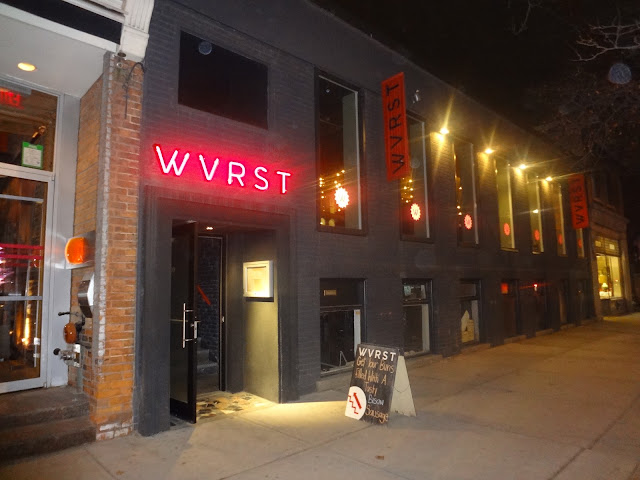 The environment is very laid back where everyone seats themselves on communal tables. Reservations are taken for large groups. The lights on the ceiling are just awesome. I like how it turns out in pictures. It almost feels surreal. 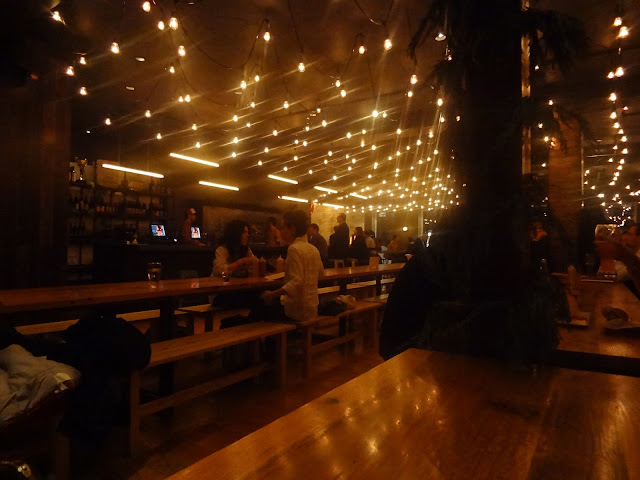 Ordered this soda drink instead of beer. Not much of an alcohol person. The drink had a lemongrass aroma with a lime tasting Pierrer water. It's slightly sweeter than Pierre, but not as sweet as soda.
There were so many sausage choices. With help of handy dandy iPhone, we did a quick search on what people recommended, and it came down to bison, wild boar and duck. In the end, we decided to order just one duck sausage with duck fat fries to share since we will be hitting up another place right after.
The duck fat fries were good, but they were inconsistent. All the fries had different textures. Some were soft, some were hard, and some were just right. If you are lucky and picked the right one, dipped in the mayo sauce, it tasted wonderful. The fries had the right amount of saltiness and tasted fine just on its own.

On to the duck sausage hotdog. The sweet pepper didn't do anything and it just kept falling off, thus, end up eating them separately. The duck sausage tasted good, but in a bite with the bun and onions, it was a mush. They sausage didn't have any texture at all. At times you weren't even sure if you took a bite of the sausage at all. 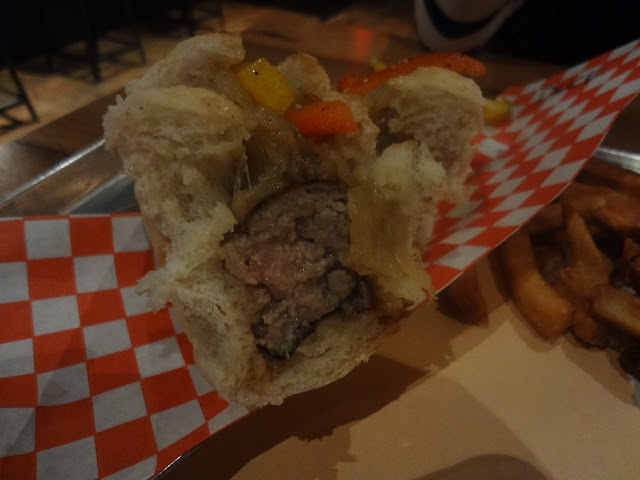 In the end, I do like this place and would come back to try some sausages, hopefully with more of a bite.